Mini Cranes Go Behind The Scenes

Mini Cranes Go Behind The Scenes 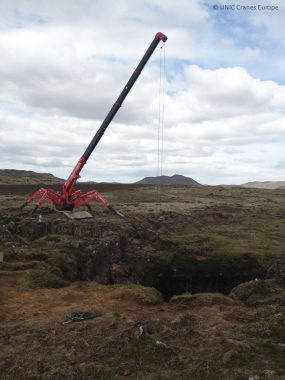 To prepare this environment for the actors and production crew, a 2.9 tonne capacity UNIC URW-295 mini crane removed rocks from the cave’s opening before installing metal frames inside it. As scenes inside the cave were filmed, two UNIC URW-295 cranes held a protective cover over the cave so the weather wouldn’t disturb the work going on below.

These UNIC mini cranes were popular amongst the movie’s production crew who were impressed with how quickly and easily these lifting machines were set up on the location’s rough terrain. The tracked cranes were also transported over plastic boards so not to damage any of the delicate landscape on their 50 metre journey from the closest road access point to the film set.

We can’t wait to see how these UNIC mini cranes helped create movie magic when the film is released in 2014!

Metzo Machinery, based in the Netherlands, has recently taken delivery of four UNIC mini spider cranes from UNIC European master dealer, UNIC Cranes Europe. The company is also the latest to join the UNIC cranes dealer network, providing UNIC cranes for both sale and hire across the Netherlands. The purchase sees the delivery of a

Lifting Glass in Confined Areas with the UNIC URW-095

The 0.995 tonne capacity UNIC URW-095 mini spider crane recently helped with lifting operations at this private house in the Czech Republic. This mini crane lifted the glazing from the glass trolleys and then manoeuvred into position for a seamless installation. The glass weighed in at 250kg to 620kg, and measured up to to a

When a self-supporting steel staircase needed to be installed in the atrium of building in the UK, a UNIC URW-506 m… https://t.co/boqabA2D0S

Two UNIC URW-706 mini cranes were better than one for this project in the UK 💪 These 6 tonne capacity machines wer… https://t.co/kao3L7Wiq2

The UNIC URW-295 mini spider crane is renowned for its mobility, rugged reliability and high productivity in some o… https://t.co/ZUt42lWmRb

@brunoduartept Hi Bruno, apologies for any inconvenience this may have caused. I will look into any issues with the… https://t.co/smsgnL1JUf