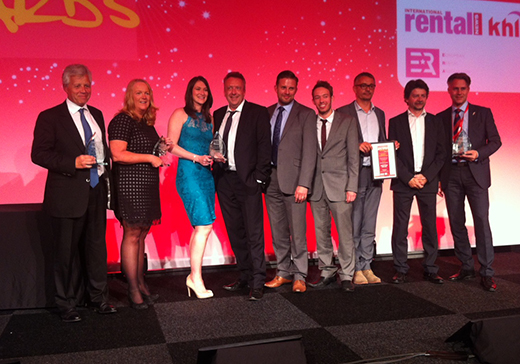 Managing Director of UNIC Cranes Europe, Gill Riley, was celebrated for her achievements in the rental industry at the European Rental Awards in Amsterdam as she was awarded the prize for ERA/ IRN Rental Person of the Year.

Joined by members of the UNIC Cranes Europe team for the awards dinner, Gill was presented with her award by ERA president Vesa Koivula. The awards were judged by rental industry experts from around Europe who chose Gill for the evening’s sixth and final honour. As the only female to ever win this award category, she was recognised for her hard work leading one of the fastest growing rental businesses in Europe and hitting the milestone of selling 1000 mini cranes in 2013.

The event took place at the RAI exhibition centre in Amsterdam, Netherlands, where the APEX show, European Rental Association conference and the International Rental Exhibition are all taking place this week.

UNIC Cranes Europe is part of The GGR Group, based in the UK, who also recently took home an award from the Hire Awards of Excellence for HAE Company of the Year.

After adding cranes to her hire fleet, these machines were soon in high demand, transforming Gill’s business into an ‘overnight’ success. In 2004, Gill successfully secured a European Master dealership with manufacturer Furukawa UNIC, created UNIC Cranes Europe and started to build her network of 27 distributors.

Read more about the event on the International Rental News website.

Emilio Lens has been appointed European Sales Manager for UNIC Cranes Europe, tasked with managing and growing a dealer network throughout Europe, UAE and South Africa. The announcement comes after a launch of the new UNIC URW-345 ‘pop-up’ crane at Bauma, Munich in October 2022, with production units expected to be delivered this Summer. Multi-lingual

The UNIC URW-345 lithium-ion pop up crane, a brand-new micro crane from UNIC Cranes Europe, will debut at Bauma from October 24 –  30, 2022. The maximum lifting height and capacity of the URW-345 Pop-Up are 16.5m and 3.2t, respectively. This small spider crane, which is powered by a lithium-ion battery, is full of innovative features

Unic Cranes Europe has confirmed the appointment of Emilio Lens as European sales manager! "I am happy to be at Un… https://t.co/bsTTiXneQd

UNIC mini spider cranes are often used to help with essential maintenance works in aircraft hangars. The small wo… https://t.co/idvBuqUeHS