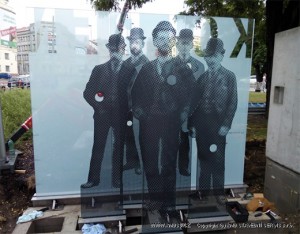 The memorial commemorates Emil Kolben, an engineer and entrepreneur from Prague who co-founded one of the Czech Republic’s most important electrical engineering companies. Kolben and four of his colleagues from Thomas Edison’s workshops in the USA who died during World War II are depicted by these lifesize cut outs. 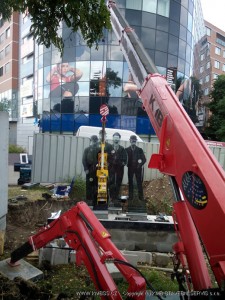 A UNIC URW-295 mini crane was used to lift each figure into place as well as a panel of white frosted glass to act as a backdrop. Each cut out was made from 19mm thick tempered glass and included holes to represent areas of where the men were originally injured.

The 2.9 tonne capacity lifted the glass loads using slings and a 320kg capacity P11104 Four In Line glass vacuum lifter. Thanks to the crane’s manoeuvrable outriggers it was able work safely on the uneven ground and around mounds of rubble on this unfinished site. 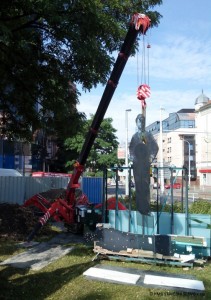 Take a look at more examples of UNIC mini cranes installing sculptures and artwork in our Gallery.

Emilio Lens has been appointed European Sales Manager for UNIC Cranes Europe, tasked with managing and growing a dealer network throughout Europe, UAE and South Africa. The announcement comes after a launch of the new UNIC URW-345 ‘pop-up’ crane at Bauma, Munich in October 2022, with production units expected to be delivered this Summer. Multi-lingual

The UNIC URW-345 lithium-ion pop up crane, a brand-new micro crane from UNIC Cranes Europe, will debut at Bauma from October 24 –  30, 2022. The maximum lifting height and capacity of the URW-345 Pop-Up are 16.5m and 3.2t, respectively. This small spider crane, which is powered by a lithium-ion battery, is full of innovative features

Unic Cranes Europe has confirmed the appointment of Emilio Lens as European sales manager! "I am happy to be at Un… https://t.co/bsTTiXneQd

UNIC mini spider cranes are often used to help with essential maintenance works in aircraft hangars. The small wo… https://t.co/idvBuqUeHS